Supporting public art has become a part of Hamilton city's culture and identity. Waikato Museum working together with other units within Hamilton City Council, is responsible for the conservation and care of these works.

(Note: the cover portrays a photo of the cast bronze sculpture of Captain Hamilton, after whom Hamilton city was named.  This was located outside the Hamilton City Council Municipal Building, Civic Square, for a number of years, but is not currently on public display.) 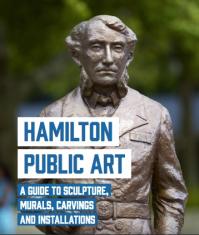 Tongue of the Dog

Tongue of the Dog was conceived by sculptor Michael Parekowhai and gifted to the city by MESH Sculpture Hamilton. The 8 metre tall sculpture represents the creation legend of the Waikato River, in which a servant dog cuts a pathway for the healing waters of Tongariro to reach an ailing Taupiri. The colourful blocks reference Cuisenaire rods, an educational tool originally designed to teach maths and now also used to teach te reo Maaori. Find out more here. 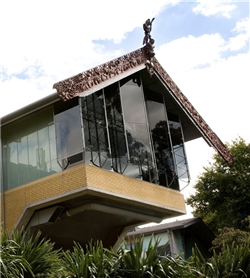 Installed in 1987 when the new museum building opened.

The tekoteko and maihi wood carvings are located on the Waikato Museum roof, on the river bank side of the building. 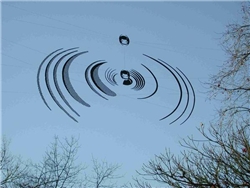 The Ripples sculpture was commissioned in 1987 by Hamilton law firm McCaw, Lewis Chapman for the opening of the Waikato Museum building in Grantham Street. It is a suspended sculpture, comprised of a six metre span of carbon fibre reinforced polyester resin, which represents the ripple effects of a falling stone hitting the water. It hangs between the canopy of trees, approximately 20 metres in the air, above the riverbank. Artist Neil Dawson from Christchurch was responsible for creating the sculpture.

Inset into the wall of the ArtsPost building on Victoria Street are a series of etched and sculpted terracotta tiles. A collaboration by two prominent Hamilton artists, the tiles depict different styles of art and feature three New Zealand women artists - Ida Carey, Frances Hodgkins and Margot Phillips. 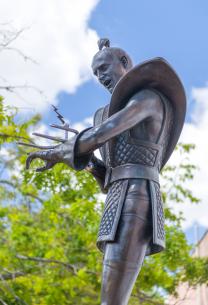 Located in Embassy Park, Victoria Street, the life-size cast bronze sculpture of Riff Raff, a character in The Rocky Horror Picture Show, a cult musical created by Richard O'Brien, celebrates O'Brien's international success. O'Brien's development in theatre began here in Hamilton, where he spent some of his childhood. 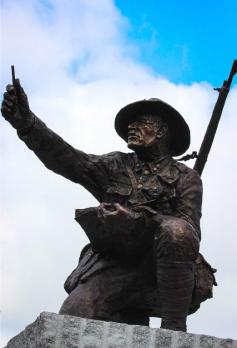 A commemorative public artwork by Hon Captain Matt Gauldie. The bronze statue depicts Moore-Jones sketching, as though at Gallipoli, kneeling on the stone gifted and transported to Hamilton by the Turkish Government and the City of Çanakkale through the efforts of Turkish Ambassador Damla Yeşim Say. In Turkey, the WWI event is known as the Battle of Çanakkale for the Province straddling the Dardanelles Strait, and the name of the City at the narrowest point. 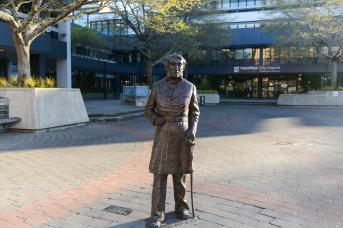 The historical figure of Captain Hamilton comes alive in Margriet Windhausen's representation of the man who the city is named after. Holding his ceremonial sword close to his body, he stands as a life-size image of early New Zealand European history. This cast bronze sculpture is not currently on public display. 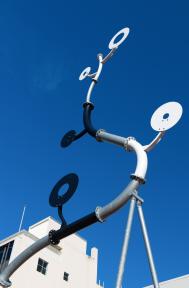 Located in Garden Place, 'Te Tiaho O Matariki' is a sculptural manifestation of the Pleiades in the form of a growing vine. The stars of Matariki appear as the fruit on this extraordinary plant. The sculpture is a sign of growth, unity, and continuity. 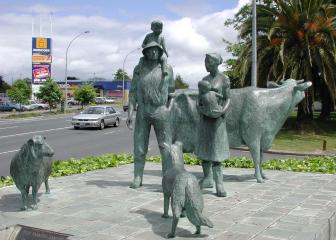 Located on the corner of Ulster and Victoria Streets (southern end), the characters of this cast bronze sculpture are life-size figures of a male farmer and his wife, their two children, a cow, a sheep and a dog. This work commemorates the ordinary farming family as being iconic in the Waikato region.

Located in the reception of the Hamilton City Council Municipal Building, the wood for these 12 carved panels originated from a Plane tree that was planted in Grey Street (Hamilton East) by George Mason in 1875, and felled in 1981. Depicting the Hamilton City Council coat of arms, aspects of Waikato industry, agriculture and leisure, this artwork reflects elements of the Waikato lifestyle. 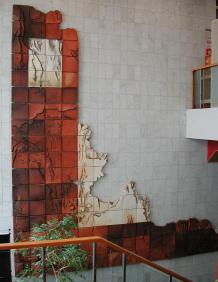 Located in the reception lounge foyer of the Hamilton City Council Municipal Building, a series of handcrafted terracotta and stoneware tiles are positioned to form a large mural that flows down the stairwell wall. The artwork uses the natural behaviour of clay, both fired and unfired, as a metaphor for the Council's task of providing physical and social order within a tendency for dissolution and chaos. 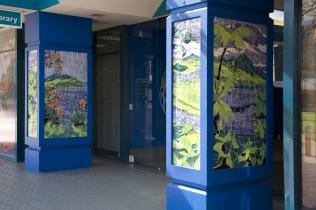 Hand-painted ceramic tiles depicting landscape scenes wrap around the entrance pillars to the Hamilton Central Library, Garden Place. Scenes and images from the Waikato, including rivers, lakes, birds, form narratives of the environment. This artwork was commissioned for the opening of the library building. 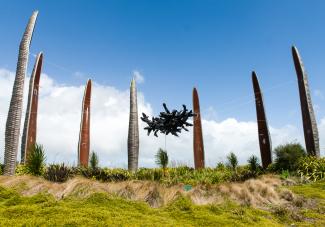 Seven vertical waka placed in the formation of the Kingitanga symbol of the Matariki star constellation, standing firm in the Borman Road, Resolution Drive roundabout. 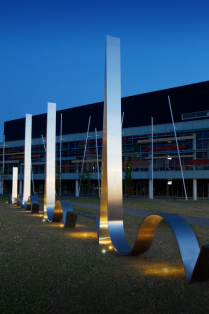 Te Pumanawa O Te Whenua | Beat Connection  runs like a heartbeat graph along the grass outside the Claudlands Event Centre. The role the event centre has in bringing sports, concerts, and conventions to the city, relates to this work, as the excitement and emotions we experience internally are often reflected physically by our heartbeats. 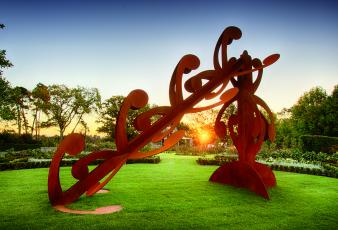 Located on Lake Domain Reserve, corner of Pembroke and Ruakiwi Roads, this artwork refers to the historical significance of the site, and the importance of its ongoing conservation and care.

Located in the Hamilton Gardens (near Gate 2), Little Bull could be seen as a symbol of the Waikato's link to te dairy industry and agricultural splendour. But mostly the artist wanted to make an artwork that encouraged tactile engagement. 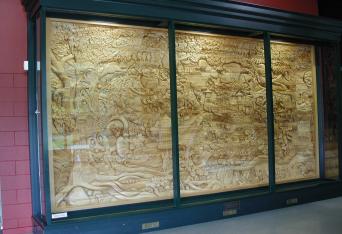 The large mural was carved from a Camphor laurel (Cinnimomum camphora) tree, which had been felled in Grey Street in Hamilton East. The artists were inspired by the Hamilton Gardens and decided to make and donate a carving specifically for this site. 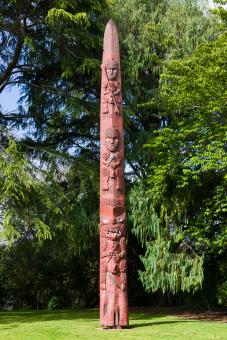 As visitors enter the grassed and planted area nestled by the river on Moripiko Reserve, 339 River Road, a towering pou visually commands attention. Miropiko's carved pou portrays key ancestral high chiefs of Ngāti Wairere and their related hapū, Ngāti Hānui and Ngāti Koura. These chiefs, who once occupied Miropiko Pā, are commemorated in the ancient carving patterns painted with kokowai. 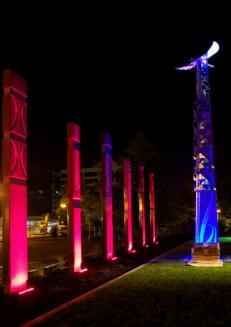 Located on the Wintec Marae, these carvings are made from traditional and modern materials includingtōtara, concrete and stainless steel. The gateway entrance, tomokanga, designs welcome people from around the world to Wintec.