An installation by Emily Rumney

In this work Emily Rumney explores the idea of the ‘wholesome’ façade within the formalised set up of the family portrait. The viewer becomes a voyeur into an intimate, interior space. Rumney depicts sweet little family interactions, which, on closer inspection becomes disconcertingly out of kilter. Stoic and constrained, the subjects are boxed in and rendered in delicate sepia-toned intaglio prints; all-the-while politely hinting at the unsettling idea of what goes on behind the scenes of these colonial family images. Long-held family secrets once thought to be buried or eventually given up are exposed. 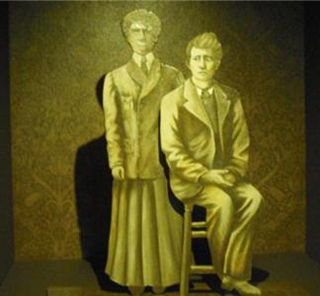 Local artist and craftsperson Emily Rumney has been working and exhibiting in the Hamilton art community since she was a teenager. Rumney has had several successful solo and group shows and has worked as a professional picture framer for 12 years.

It is not surprising then that she works primarily in miniature dry point intaglio printmaking. This love for small beautiful creations has enabled her to create very small works such as brooches, as well as delicately mounted multi-media prints that highlight her skill as an object and image maker.

Rumney has a love of colonial photographs and their old-world aesthetic. Perhaps this is what prompts her to collect children’s illustrated books latent with morbidity. This fascination with uncertainty and disquiet permeates her image making, constructing scenarios that are not always what they seem.