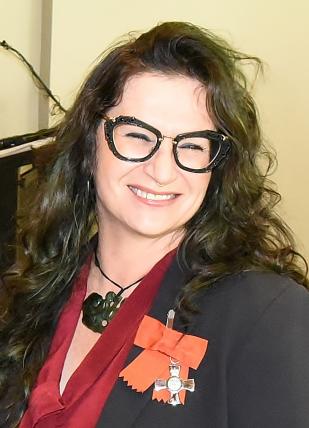 One of Aotearoa’s most notable and decorated artists will judge the 2019 National Contemporary Art Award.

Regarded globally for her photography, Pardington was made a Member of the New Zealand Order of Merit in 2017. In 2016, she became the first New Zealand visual artist to be named a Knight (Chevalier) in the Order of Arts and Letters (Chevalier de l’ordre des Arts et des Lettres) by the French government.

Of Ngaai Tahu, Kati Mamoe, Ngaati Kahungunu, and Scottish (Clan Cameron of Erracht) descent, Pardington has received many fellowships, residencies, awards, and grants during her illustrious career. They include the Moët et Chandon Fellowship (France) in 1991-92, the Frances Hodgkins Fellowship in both 1996 and 1997, the Ngaai Tahu residency at Otago Polytechnic in 2006 and both the Quai Branly Laureate award, La Résidence de Photoquai, and the Arts Foundation Laureate Award in 2011.

Pardington says: “I’m honoured to judge this wonderful award, especially in its 20th year. It’s a credit to the organisers that the award has prospered and gained in significance over this period. I’m sure the 2019 awards will add to its wonderful legacy.”

Waikato Museum Director Cherie Meecham says having Pardington as the judge is a coup for the award and Waikato Museum.

“Having a judge as esteemed as Fiona to mark the 20-year anniversary of the National Contemporary Art Award is extremely fitting,” says Ms Meecham.

“The opportunity to have Fiona see, and potentially select, an artist’s work will be a huge incentive to enter this year’s award, let alone the chance of winning.”

The overall winner of the award will receive a cash prize of $25,000 from major sponsors Tompkins Wake and Chow:Hill.

The winner of the Hugo Award for Runner-Up, sponsored by Hugo Charitable Trust, will receive $5,000, while two Merit Awards of $1,000, supported by Random Art Group and Friends of Waikato Museum, will also be selected.

The $250 Campbell Smith Memorial People’s Choice Award winner will be decided by public votes during the exhibition season.

The award exhibition will be open from 3 August to 10 November 2019.

To enter the 2019 National Contemporary Art Award, go to waikatomuseum.co.nz/ncaa.