We honour ngaa atua/akua waahine, the divine feminine, embodied in whenua/ʻāina (land), moana (ocean), wai (water), and ngaai tipu, ngaai kiirehe (flora and fauna), to emphasize the importance of mana waahine from time immemorial. Featuring female voices (koorero/moʻolelo) of waahine whom anthropologists and historians omitted from mainstream texts and resources, we seek to restore gender complementarity and balance. The reclamation of the centrality of waahine/women is timely, because presenting (her) stories that manifest in our natural environment illuminates a pathway toward a more sustainable future, imbued with relationship.

Developed by Dr Nālani Wilson-Hokowhitu (Kanaka Maoli), Dr Aroha Yates-Smith (Te Arawa, Tainui, Horouta, Takitimu, Mataatua), and curator Poutiaki Whakataki Maree Mills (Ngaati Tuuwharetoa), this exhibition draws from their research and collective commitment to hear, understand and act on these messages. The continuation of human life on this planet is, in their view, dependent upon it.

Education programmes are available for this exhibition.

Videos included in the exhibition: 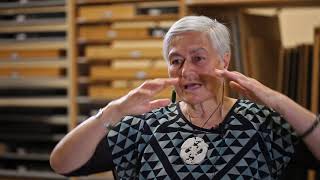 “According to at least one iwi tradition, Taane’s union with Hine-Tuuparimaunga, the mountain, resulted in the birth of Parawhenuamea.  The term Parawhenua connotes silt rising up out of the ground with the water’s force.” 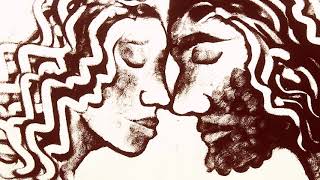 Dawn Tuffery is a producer and animator with Nimbus Media, a Hamilton production company specializing in telling stories through video.  She enjoys the tactile, organic nature of stop-motion animation and its possibilities.  This short film tells the story of Hineaahuone’s origin, this work is created with sand collected from Raglan beach, and shaped frame-by-frame with fingers and sticks. 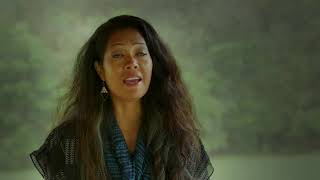 “Laka isn’t necessarily looked at as the forest itself by many because Laka is so associated with hula, but we are Laka and we are the forest.”

“Hawai’i was a very matriarchal society in that we recognized that all life came from Po’ele, the first female.  There was of course Kumulipo, but there would be nothing if Po’ele didn’t come forth as well. We honour our different main akua wāhine as Haumea, as Hina, as Pele, as Papahānaumoku, but what is really interesting is that we’re seeing this kind of overlapping of all these akua wāhine and understanding that they may very well be the same female element in all of stories stemming from Po’ele herself.” 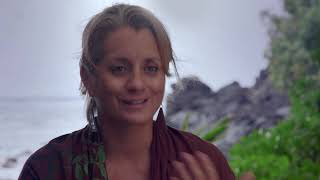 “Moloka’i is unique in that is the only island child of Hina.  Hina is an akua wāhine that you hear of all throughout the Pacific. Either we call her Ina, Sina, Hine, or Hina.  She is that same female akua that is very important in our story.” 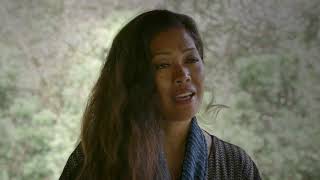 “My intention is to heal the planet one mo’olelo (story) at a time, one ‘oli (chant/prayer/rap) at a time, and one work of art at a time.  Art has the ability to soften the heart and open the mind to discuss and start the conversation.”