“Art is defined as a form of intensification of ta - time, and reconstitution of va - space, and involves transformation from a condition of chaos to a state of order through sustained rhythmic production of symmetry, harmony and, more importantly, beauty."

Artists bravely place their work under our scrutiny. In this exhibition, each artist shares something they have never exhibited before. By looking at and responding in some way to these artworks, you change from ‘stranger’ to ‘participant’.

This year the three Merit Award winners each received $1,000 from the Friends of Waikato Museum, Random Art Group and David’s Emporium.

ArtZone magazine is the sponsor of the People's Choice Award.

Fountain is a Copy?, Ella Sutherland and Matthew Galloway

The finalists for the 2016 National Contemporary Art Award are:

Find out about our art education programme here.

The National Contemporary Art Award on Facebook and get updates first. 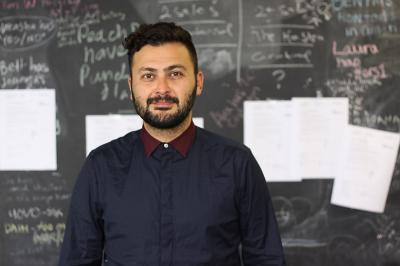 Misal Adnan Yildiz has been the Director of Artspace NZ since November 2014.
Previously, he was the artistic director of Künstlerhaus Stuttgart between 2011 and 2014, one of curatorial collaborators of Fulya Erdemci for the 13th Istanbul Biennial (2013), and manifested A History of Inspiration as part of Nouvelle Vagues, Summer programme 2013 at Palais de Tokyo, Paris.

Yildiz was a participant of Curatorlab/Konstfack between 2006 and 2008, and collaborated with IASPIS, both in Stockholm. He produced significant number of solo exhibitions with Slavs and Tatars, Cevdet Erek, Ahmet Ögüt, and Hito Steyerl, among others as well as some group shows after his proposals were being selected through open calls or closed competitions: There is no audience at Montehermoso, in Spain (2009), Time Challenger, HISK, Belgium (2009),Correct me if I am critical multi venue project in Berlin (2010). He was shortlisted for ICI Vision Award in 2012 and shared Curate Award 2014 (Fondazione Prada & Qatar Museum) with two others.