On October 17th, 1917, William R. Friar, or Bill as he signed off his letters, sent a telegram home to his mum that simply said ‘doing splendidly’.

He was in 83 General Hospital in Boulogne, France, suffering from wounds received while fighting in the sodden, bitter battlegrounds of Ypres. Friar wasn’t really doing so splendidly. He admitted in a letter to his brother in law that he had said that so his Mother would not worry herself, and he was actually in a lot of pain from the bullet that broke the bone in his right thigh. During the next two weeks, four telegrams were sent to Mrs Eleanor Friar. The first said he was seriously ill. The second and third, “Friar dangerously ill”. The fourth advised Mrs Friar that she had lost her only son. He would be buried in France with thousands of other Kiwi boys, who gave their lives for God, King and Country, and left their mothers weeping in small towns all over New Zealand.

The Museum holds over 130 letters, telegrams and other objects related to William Robert Friar, rifleman in the NZRB, which were donated in 1982 by Miss Susan E. Gordon. The intimate letters and harsh realities of the telegrams combine to tell the story of one young man of many thousands, who died for our nation, still in its infancy.

The pile of letters is fascinating before they are even read. Many of the envelopes, well worn with age, are pre printed with ‘On Active Service’ or indicate the censor has cleared the contents. The letters themselves, still carefully folded, carry news of parcels received, the conditions and weather, and hopes that the family is doing well. In one letter Friar thanks his mother for the socks, but notes that she needn’t send any more, as after all the trouble they had with ‘trench feet’ they must change their socks once a day and there are plenty supplied now.

One of the most tender letters however, scarce mentions the war. Friar received a cable that told of his Father’s death, and he poured out his grief on paper to his Mother at home. He said it was the only time he ever regretted enlisting, as he should have been home when his Father needed him, and now when his Mother did.

Eleanor Friar kept a small black notebook, with the names and addresses of soldiers, and a record of letters sent and received, and the date she sent parcels to “W.R.F” filled with socks, balaclavas, cocoa, tobacco and even plum pudding. Some of the soldier’s names and addresses have ‘transferred’ scrawled through them. Many however, have the words ‘killed in action’ or ‘died of wounds’ crossed through them.

Photos of Friar in uniform, a small diary and letters that stack in cute piles tell the story of a young New Zealand boy at war. But like too many others, his story was cut short and many more of the museum objects relate to Friar’s death. On November 5th 1917, Huntly born W. R. Friar died of wounds after secondary haemorrhaging. The Museum cares for the telegrams sent to his mother, black edged letters of sympathy, official cables from the war office and photos of his grave. Inside a small envelope, a delicate ring of dried ivy that was gathered from his grave rests gingerly. 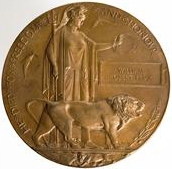 A large memorial medal with a letter from Buckingham Palace is also amongst the objects - “I join with my grateful people in sending you this memorial of a brave life given for others in the Great War”. The medal is engraved with Friar’s name and the words “He died for freedom and honour”. A scroll that came with the medal says “Let those who come after see to it that his name be not forgotten”. Lest we forget.

- These objects along with the story of W. R. Friar will be on display at the Waikato Museum from the 14th April as part of the exhibition ‘Post Script: Letters from our Permanent Collection”.