Home / Explore » Our stories » War and Military » A Captain's Uniform 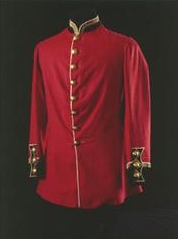 Food shortages, frigid weather, a lack of arable land and the threat of battle – what better time to hold a ball?

Almost a year after settling in Kirikiriroa, conditions for the 4th Regiment of the Waikato Militia were looking increasingly bleak.  But even a grim Waikato winter did not deter the planning of an Officer’s ball.

The Waikato Museum holds a single programme to the ball, which was held on June 23rd, 1865.  The 141-year-old paper shows signs of its age, but is still intact and legible, and complete with its pale blue ribbon.  The programme belonged to Sir Roger de Coverley, and inside reveals two columns of 12 dances each, including the Galop and Polka.  Sir de Coverley had pencilled in partners against a number of the dances, (Anne for the Caledonian dance), but it appears a partner for both waltz numbers still eluded him.

The fragile programme was donated to the Museum in 1970 by Miss Elizabeth Morton of Auckland, and is one of many objects that help paint a picture of life in early Hamilton, which began as a tiny military settlement, on August 24th, 1864.  Other objects include a leather covered military order book, photographs and paintings, survey maps, medals and even a selection of Victorian clothing. 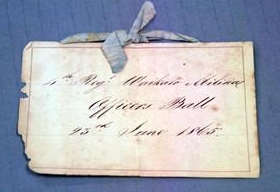 One of the most important clothing items is Captain James McPherson’s tunic.  The resplendent red of the outer fabric is a stark contrast to the description of early Hamilton - bleak, wild and desolate, with comfortless surroundings and a ‘very unpromising aspect’.  The offer of land was enough for many to brave the gloomy conditions, but the land that had lured them was rarely arable, and often swampy.  After protest it was decided that if a soldier’s land was more than half submerged, a new ballot could be drawn.  Privates were entitled to a one-acre town lot and 50 acres in the country, where as Captains received 300 acres, and could select their land before other ranks were given the opportunity.

Captain McPherson would have received 300 acres, and combined with his higher rates of pay was able to build up an extensive and successful agricultural operation.  In October 1868, he became one of the 10 original members of the Highway board, whose main task was to make and maintain roads.  His tunic was donated to the Museum in 1964 by the Waikato Historical Society.  With silk lining, velvet facing and buttons to the neck, the uniform is still impressive and commanding.  Single breasted, the tunic has a single vent at the back with piped edges and three buttons set on brocade on each flap.  Its straight sleeves have piped velvet cuffs, and there is also piping and brocade around the collar.

Together such objects provide us with a tangible history of our earliest European settlement – a tiny military settlement whose tenacious residents had to brave the harsh conditions, but did get to go to the odd ball for a waltz or galop from time to time.