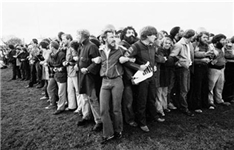 To me and my mate Lex Dawson the events of the day were unplanned, surprising, frightening and unforgettable. We'd joined a group of friends based around "The Potters Arms" a pottery shop we ran in Mt Eden near Eden Park which had become a bit of a meeting place for artists who were prepared to get stuck in against the tour; people like Tim Shadbolt, Stanley Palmer, Pat Hanly, Barry Lett and a bunch of other people with more bright ideas than common sense who eventually evolved into a group called AAA – "Artists Against Apartheid", dedicated to making the protests less ugly, more creative, but still effective, and at the same time it was a way to avoid getting our heads beaten in by the police. But that was a month or so down the track.

We'd reached Hamilton and merged into the front of the tightly packed march like good foot soldiers and found ourselves halted outside the perimeter fence near a point which it seems someone had decided was vulnerable. Or it might have been a fluke. In any case everyone suddenly turned towards the rugby ground and raced up the slope and in a few seconds the netting fence came down, the crowd inside politely parted for some reason and a stream of protestors hurtled in and down the terraces and straight onto the ground where suddenly there was a weird feeling of space and freedom and no rules, nobody had a clue what to do with such a huge area to deal with. So we all ran around for a while with our arms flapping and whooping a bit. Then I saw another mate on the ground being bullied by a large thug in a blue tracksuit who I guessed was a Rugby man. I was never any good at fighting but I saw red and I grabbed him by the scruff of the neck and spun him round, pretty sure that once again I was going to get done over just like all the other times from Primer 2 on. But I was grumpy about his attempts to break my mate's arm. It did the trick and he let go and faced me, and it was then I saw the big logo across his track suit "POLICE"; I ran for my life apologising about the mistake, and I eventually looked back to see that my mate had at least stopped being assaulted and was being led from the field to the police van. He told me later that the crash helmet he'd been wearing had been badly damaged by a pair of binoculars that a rugby fan had hurled down at him from the top of the stand as he went under it– that's how cross the fan was. Would have killed him if he'd been bare-headed. Or he could have killed the cop.

Anyway we all eventually congregated in the middle of the field like soap bubbles on water and linked arms. Maybe someone like Terry Dibble told us to do that. We certainly needed some direction - this whole thing was being choreographed on the hoof and every move was a big surprise to me, and the fans as well, who were now getting very fed up and couldn't wait for the riot squad or a bulldozer or a baton charge which they knew would happen any minute because the game was due to start and international games never started late.

But nothing happened. We got pretty hot crammed in together in our parkas and padding, and there was stress and fear and sweat and then some bright spark suggested that on the count of three we should all sit down. But the physics didn't work out – we're all standing linked and jammed in and then we tried to sit in the same total area, we got as far down as bending our knees before we flagged the idea and reluctantly stood up again. A couple of folk peeled off and you couldn't blame them – it was best not to think about the jeering of the crowd and instead concentrate on the weirdness of the situation and the intimacy of the men you have been holding arms with for the best part of an hour and would probably never see again. A small joke or two probably didn't help but I tend to react that way; I found later that the cops don't like jokes. In the meantime Inspector Walton came out and reviewed the situation, had a bit of a parley with our leaders and probably saw his knighthood going down the gurgler, then ordered his men to run onto the field and surround us, to the cheers of the crowd who couldn't wait for the big show-down and the beat-up and the bloodied heads. We waited for that too – it was now a bit serious and we were going to get wasted, but nobody left and I don't think I planned to fight or resist I don't really know what I thought; probably that this is not really happening and they won't hurt us and somehow the crowd would see our point of view and say well done, you're right and let's forget the whole thing.

Then to our amazement the cops turned 180 degrees and faced the crowd. It took a while to figure out why, it was so much not we were expecting … seems their orders were to protect us from the crowd, who admittedly were sounding pretty unfriendly and seemed ready for a bit of a crazed charge at us. So here we were, feeling a lot better, with our own personal police protection in place, but now more puzzled about how this was all going to end. We knew that this strange stalemated scene was being transmitted all around the world, there were cameras everywhere, and that gave us some comfort too – both because it now seemed like a hugely successful protest and would certainly end the tour, and also because no politician would want to see us beaten up on international television. Later we heard that the white viewers in South Africa were incredulous that there had not been a baton charge or rubber bullets or even real bullets, part of everyday life over there – the irony of this expectation was lost on them. 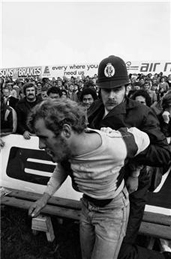 Then the arrests started. They took us one by one, starting from the outer edge where I was - I calculated that because the first few arrests took so long, we would all be gone by Wednesday. I told the cop that and he immediately arrested me. I have to admit to a feeling of huge relief as he and his off-sider dragged me away, and maybe I annoyed him deliberately. I cannot say. What I do know is that within a few yards one of them started to try to break my finger – he wanted me to walk; I am a heavy chap and they were struggling, it was agony but I had been told by the others not to co-operate, just go limp. I felt sorry for them actually – at least until they tried to break my finger. I am not proud of what happened next but I tell it as a useful tip to others in this situation. As it happened at the time my brother was up at the top of the political heap, albeit in opposition, and as the pain started to bring tears to my eyes I blurted out "Do you know who my brother is?" I pulled rank - pain does that. However I am proud that I still refused to walk, though ten seconds more and I would have been up and jogging, carrying them if necessary. The strange thing was that they did not ask me who my brother was, but instead stopped the finger crushing technique and dragged me the final 20 metres to the police van where I thanked them for sparing my finger, artists need fingers I explained but they didn't seem interested, and I lined up for the charge to be laid. The next guy Oliver Sutherland had his wrist broken. Later we all had to pay $250 in fines for disorderly conduct, Oliver still with his arm in a sling in court "Broken by Police 25/7/1981" written on it facing the judge.

Off to the cells and some more new friends, we were full of high spirits born of relief and pride that we had stopped the tour, we had a bit of a singalong and then got released to find my mate Lex, who had had to walk the terrifying gauntlet of furious fans as the game was called off after the plane threat, and the remaining group was "escorted" off the field to suffer a lot of injuries from fists and missiles. Much more dangerous than being arrested.

Muldoon refused to stop the tour. We couldn't believe it. We remained mobilised and eventually formed the AAA and worked on theatre, art, music and fundraising. All troops need a concert party. The occupation of the field at Rugby Park was a rollercoaster experience for me, not sought, but improvised minute by minute to fit the extraordinary sequence of events. We all went into these protests really hoping to make a point both within New Zealand and in South Africa. I think we had an effect that day.