In storage at Waikato Museum lies 1950s' Mooloo memorabilia. Crystal Ardern catches up with the donor and delves into the beginnings of Mooloo Magic.

Colleen Kangwai (nee Young) remembers going to Waikato rugby games as a Fairfield College student in the late 1950s and early 1960s. "I had a bit of a crush on the rugby team. I used to cut out all the articles and kept a scrapbook. With rugby, you really do get fanatics." It was that fanatical attitude that prompted Colleen to knit Waikato scarves, collect Mooloo cow placards, and even buy a Mooloo salt and pepper set, all of which were donated to the Waikato Museum in 1987.

Colleen has recently returned to New Zealand after 35 years away, and now lives in Warkworth.

"We used to go to all the games, usually in the standing area. Dad had a general store in Whitikahu and he actually let us kids paint the side of his truck with the Mooloo mascot wearing a scarf in Waikato colours. I even drew a picture of Don Clark and got him to sign it."

The might of the Mooloo goes back a long way. The Waikato Rugby Union was established in 1921, but the team was wearing black and white, or black and blue, until the current Waikato colours were adopted in 1928. The tricolour of red, yellow and black was a combination of the Hamilton school colours of gold and black, and Hamilton Old Boys colours, red and black.

In 1951, local company Booth and Chapman held a competition to create a mascot for the Waikato rugby team, and "Mooloo" the cow was the winner. The competition was held after Waikato's first Ranfurly shield victory, where they beat North Auckland at Whangarei. The boys returned home to a city ecstatic with shield fever. The Waikato Times reported: "Scenes in Victoria Street, when the team returned from Whangarei, were reminiscent of V-J Day". Mooloo placards like the one donated by Colleen were used in street parades.

It was also in the 1950s that Waikato Breweries issued "Mooloo Medicine", "bottled in New Zealand especially for the Waikato Rugby Team". The bottle donated to the museum in 1992 by Heather Lomas shows some restraint on the part of the donor - it remains unopened.

Local items provide the foundation of any social history exhibition. Exhibitions manager Gary Collins notes, "Such items have a resonance with visitors. They can identify with the objects and stories, and suddenly you have a visitor saying 'I remember having one of those' or 'My Grandad went to that'".

Colleen may have lived away from the Waikato for more than three decades, but she remains loyal to her roots. "I'm not really interested in Auckland's team. It's funny, the team you support when you're young, you seem to stick with." Sticking with her team has meant that historical objects of local importance have been preserved, and can tell the Mooloo story for a new generation of fanatics. 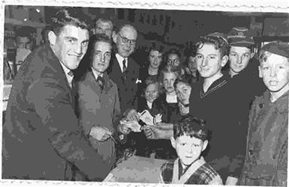