Home / Explore » Our stories » Objects & memorabilia » God Save The Memorabilia

God Save The Memorabilia

Open the pages of the Royal family pop up book, and Charles and Diana spring to life. That famous balcony wedding scene carefully replicated in colourful 3D – pull one tab for a cosy kiss between the newly weds, pull another for a wave from the Queen. It’s Royal memorabilia at its quirkiest, and it lies safely in storage at the Waikato Museum. Published in 1984, the book contains a series of ‘pop up’ scenes including a picnic at Balmoral, and the famous buzzy bee snapshot of a young Prince William in New Zealand. The book was donated to the Museum in 1987 by Mr and Mrs Brook, and is only one of dozens of items in the museum collection relating to the Royals.

One of the earlier objects is a book “60 years a Queen”, published on the anniversary of Queen Victoria’s 60th reigning year. Commemoration of the any Royal event seems to be the key, as another early object is a medal commemorating the coronation of King George VI, on May 12, 1937. It was donated by Susan Gordon of Hamilton in 1982.

Ms Gordon also donated a poster of the “Royal NZ Tour, 1953-54”. The colourful poster is in excellent condition, and reminds us of a time when the nation was ‘Royal Mad’ – free from the austerity of war and besotted with a beautiful new Queen. The poster illustrates the six-week Royal route, and is one of numerous objects including programmes and invitations, that were collected during the Royal tour.

Similarly, the 1953 coronation of a young Queen Elizabeth sparked dozens of collectibles, some of which are represented in the museum shelves. A Pascall tin, adorned with a regal portrait of Her Majesty and the words “Long may she reign”, is one example, and again points to a 1950s royal adoration and fascination. Souvenir chocolate boxes also seem to be a favourite, and a souvenir programme of the coronation service is likewise held at the Museum, protected in a buffered envelope. It describes the order of the events of the service, which was held at the Waikato Winter Show, Bledisloe Hall, on June 2, 1953. Both objects were also donated by Mr and Mrs Brook, who appear to have had a penchant for all things Royal. 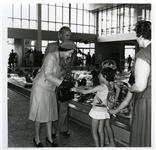 While most Royal related objects would be considered part of the history collection, a 1981 work by Robin Morrison is part of the fine art offer. Titled ‘Hamilton Hotel’, the work depicts the bathroom adjoining the ‘Queen’s Room’ in the Hotel, so called because it was indeed the Queen’s room during her stay in Hamilton, and had been completely refitted for her Majesty. The museum does not appear however, to hold anything related to the, er, Royal Throne.

Souvenir Hanky’s, The Weekly News, photos and newsclippings – Royalists in New Zealand today might be few and far between but there is no doubt the nation was once high with a Royal fever. Objects carefully kept in the Museum ensure we all remember the time when the Royals reigned supreme – even if all they seem to do today is play polo. God save the Queen.