Home / Explore » Our stories » Objects & memorabilia » Fans From The Collection

Fans From The Collection 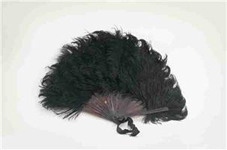 Take a peek at the variety of fans tucked away in storage at the Waikato Museum.

Up on a stepladder in Collection Storage, amidst the old razors and pillboxes and neatly stored brollys, I found a fan. A black, ostrich feather fan, with delicate ribs and extravagant plumage. It was thick and full and in pristine condition, just begging to see the light. I gingerly opened it, and stood there for a moment, enjoying the excitement of a ‘new find’. What was its former grand life? Did it belong to someone who wore corsets and bustles and ate tea and crumpets? Did she look over the silky feathers demurely at some gentleman across the way? Or did she snap it shut in fury as she ordered, “pull tighter, pull tighter!” on the aforementioned corset? I slowly fanned my face and for a brief moment was overtaken with delusions of grandeur of what my life could be like with such an exquisite little number. I needed an ostrich feather fan! I often think I need things in the collection. I have never smoked in my life, but the 1920s cigarette holder I once came across perched in the collection shelves is also on my list of ‘top 10 things I need’. (As is a recipe book for ‘cooking with rations’, and a 1950s coat hanger with a stylised ladies head on the top). 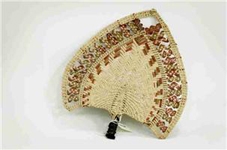 But back to my fabulous fan. I discovered it was actually made between 1900-1910. The feathers are attached to imitation tortoise shell ribs, and Mrs Tui Twidle donated it to the Museum in 1987. She noted that the fan had belonged to her Mother, but I wanted to know more. I took a punt with the white pages and on my third Twidle, I found Alan, Tui’s son. He doesn’t remember much of his Grandmother, the original owner, but does remember a lady in “wide black hats and clothes to the ankles” coming down the steps to his house in Rukatai street, Auckland. Alan believes his Grandmother visited England before the First World War, and the delicate fan could have been brought back with other fancy new purchases from the homeland.

With my new favourite object carefully laid on a table, I set off in search of other fans in the collection. A large cream fan, over 100 years old, was the next to be discovered. Its carefully carved ivory ribs and a delicate gauze and lace covering spread out 65cm wide. A folding fan made by Luis Colomina-Fabrica de Abanicos in Spain in the early 1900s still had its original box, and dainty, hand painted country scenes on each side were signed by the artist, P. Garcia Roca. Fans from Kiribati, Fiji, Samoa and the Solomon Islands are all held in the Waikato Museum. The fine weaving and striking patterns speak of the skill of the unknown Pacific women who made them years earlier.

Another Ostrich feather fan emerged in my search, this one from Nigeria. Black, brown and green leather form the handle, and thick black ostrich feathers form the body. Paramount chiefs used fans of this type, noted the donor, Miss G. Osborne in 1972. It was collected by the Late Rev David Osborne, a missionary in the Sudan Interior Mission, Niger Republic.

But none of these fans could beat the allure of the one belonging to Tui Twidle’s mother, with its silky soft feathers telling stories of a different era.