For Queen And For Country - The Boer War

The moustached men would soon be off to the Transvaal, defending the Empire and saving the Queen. But before all that they gathered for a group photo in Auckland.

It seems there had been no clear instructions on what to do - was it gloves or no gloves? Looking straight ahead, or gazing off into the distance? A stoic stare or slight smile? But the shot was taken, and more than 100 years on the photo lies tucked away at the Waikato Museum, where it adds another layer to the Boer War story.

The photo of the New Zealand soldiers was taken by W. Beattie, and was likely snapped before the group headed to the Boer war conflict of 1899-1902. Uniforms are often meant to keep people the same, but despite the uniforms, the men in Beattie’s photo all seem to tell their own story. The young one in the middle has anxious eyes. The man on the far right has let a smile creep upon him and looks as if he would be a caring father. Others still look tired, seasoned even, perhaps as if they know exactly what they will be facing. 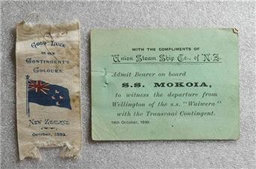 The South African war (commonly called the Boer war) was the first overseas conflict to involve New Zealand troops. In October of 1899, 10 days after the outbreak of war, New Zealand troops were given a send off from Wellington. Prime Minister Seddon proclaimed that New Zealanders 'wouldfight for one flag, one Queen, one tongue, and for one country - Britain'.

The Museum holds numerous Boer War photos, mementos and objects. A ticket from the Wellington send off is one of them. On green card, and with the ‘compliments of the Union Steam Ship Co., of N.Z’ the ticket would admit the bearer on board the S.S. Mokoia, “to witness the departure…of the s.s. Waiwera with the Transvaal Contingent”. It was donated to the Museum in 1964 by the Waikato Historical Society.

In the same year, the Society donated a small ribbon bearing the New Zealand flag and the words “Good Luck to our Contingents Colours. New Zealand, October, 1899”.

Closer to home, the programme for the Grand Patriotic Concert held at Volunteer Hall, Hamilton is still intact. The orchestra programme was held on January 26, 1900, with “Proceeds in Aid of War Funds now being raised throughout the Empire”. Front seats were 3 shillings, back seats were 2, and the programme was donated by Mr and Mrs Charlie H. Holloway in 1969.

Still, the concerts and ribbons can’t disguise the realities of war. In all 10 New Zealand contingents were sent to South Africa between 1899-1902, and many suffered harsh conditions. The men of the sixth condition in fact staged a ‘general strike’ in protest over their ragged uniforms infected with lice and inadequate food supplies. The men no doubt were witness to many horrors, and a rifle held by the Museum is a reminder of the conflict.

The Snider Rifle was made in 1881, and was used by Mr Wilcox in the Boer war when he served with the Imperial army. He immigrated to New Zealand around 1915, where he settled in Te Pahu. It was donated to the Museum by his niece-in-law, Mrs M. Tasker in 1984. Wilcox’s rifle, with its 30.5 inch barrel, was one of thousands that eventually tipped the scales in favour of the British, who won the war when a peace treaty was signed on May 31, 1902.

The war was won, and soldiers returned. And though we were fighting for Britain, the war did strengthen an emerging national identity.