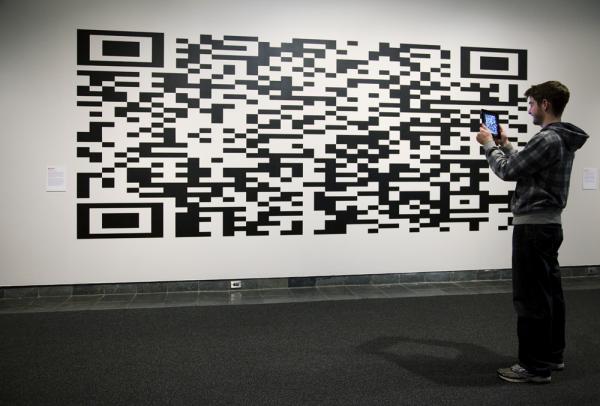 AND THE WINNER IS...

Sydney based Andre Hemer with his entry 'Blue Poles'

Three Merit awards were awarded to...

Each year, the Award also gives the opportunity to view New Zealand’s contemporary art scene through the eyes of a respected curator.   John Hurrell is an accomplished artist and is also well known in the national and international art scene as a curator, art writer and critic. Mr Hurrell was the art curator at Waikato Museum from 2001-2004. He now lives and works in Auckland where he writes art-related articles and manages EyeContact – an online magazine/art forum.

Tena koutou katoa. Thank you for all coming to this event tonight. You could have gone to the Auckland Art Fair to check out what artforum international publisher Knight Landesman has to say and later maybe compared his dress sense with mine - but I think Hamilton’s presentation for this evening at least, might have the edge over New York art culture proselytised in Auckland, as you’ll see in about fifteen minutes. Hamilton’s artistic relationship with New York will I hope be the topic of tonight’s conversation. First of all before I begin, I want to thank certain people in Kate’s team. It’s been a real pleasure working with Leafa, Steph, Andy, Stu, and Grace on the show’s layout, and I congratulate Dave and Trish for the design of the lovely catalogue. And sincere salutations to all the individual artists who entered the event.

The standard of entry was particularly high this year so that left me with a problem. To make the space function properly I’ve had to curate a show, shape it by including some high quality items and excluding others. There were over 200 entries so instead of say a quarter (fifty) I’ve cut it down to a fifth (around forty), making the selection more urban and gritty in its focus. Rawer, less romantic, less identity-focused or pastoral than what it might have been.

And picking a winner has not been an easy task; there were a lot of works here up for serious consideration, and 42 finalists altogether. Usually there are about 35, so I’ve taken a gamble hoping that the larger number in this case works - that there is an interactive chemistry.

So whom shall I talk about? There are several pockets of distinctive themes, obvious topics like the use of language as drawn line, urban features, facial stress, types of abstraction, or phallocentric power. Those groupings are easy to spot when you walk around.

In the gallery I’ve given out three Merit Awards but here I want to very briefly mention seven others as well, plus the winner. Some exhibits connect even if displayed on opposite sides of the space – even if only through language. A photograph by Robyn Hoonhout and a tachiste painting by Johl Dwyer have almost identical titles, about a certain noisy vocal action that usually expresses alarm.

Other works deal in manual production processes and deposited traces of used materials. Two examples are a brusherly painting by Sam Rountree Williams and a sprawling wall installation by Peter Roche of staccato, fluorescent flashes and glowing tips appearing in short bursts. There is also a charcoal drawing by Matt Ellwood of a submarine at sea that has a gorgeous flickering light related to that found in a video work by Angela Tiatia of a ruined hotel by the beach in Rarotonga.

Two fascinating items that show a preoccupation with advanced technology are the reflected buildings and machines of a video by Brit Bunkley and a massive pylon/crane transmitter from Tony Nicholls that has amplified live sound and a twitching fishing wire that generates ripples in a dish of dark water. Two other works with an unexpected quirkiness are an enigmatic diagram by Matt Moriarty and a very large sculpture by Jeff Drabble.

Moriarty sees a parallel between the different bones that make up the human skull and this country’s list of national parks, and whether one is persuaded by the metaphor or not, he has made a fascinating rich, complicated and inventive image, correlating the two sorts of organic shape.

Drabble has done something similar by blending the tribal sculptural methodology of the East African country of Guinea with a huge egg shape that stands for the growth of artistic ideas. This fetishistic and ornate form standing on four legs is also reminiscent of a rugby ball, torpedo, hand grenade or distended eyeball with headlight – an intriguing object that quickly exhilarates the imagination, conjuring up bizarre possibilities about its place in this exhibition.

The three Merit Awards are to Tony Nicholls for Datamining system, Jeff Drabble for Art tribalised, and Mat Moriarty for Suture. Now for the winner. The work I’ve picked blends digital technology with the history of modernist painting. The work could be mistaken for an impressionist version of Victor Vasarely or Bridget Riley. It appears to be about light on a moving liquid surface such as the sea, not a shaping of form using a manipulated volumetric grid.

There are two components. Firstly there is a gridded image painted in black directly on the gallery wall so it has no thickness, its rectangular modules masked by computer cut vinyl and constructed to have the same measurements as Jackson’s Pollock’s Blue Poles, a legendary American work that is generally considered the most significant twentieth century art historical item located in the southern hemisphere. Secondly there is a Google photograph that the painting as a QR Code provides on a iPhone, of a satellite view of the Australian National Gallery in Canberra - showing the location of the Pollock in this important international museum, its home since 1973 when it was acquired by the Whitlam Government for two million. (It is now worth 40.)

Andre Hemer’s winning painting is a homage to an art historical shrine and a showcasing of issues to do with the geographical distance that separates Long Island NYC (the site of Pollock’s studio) from Canberra and from Hamilton. There are three rectangles in three corners of the QR Code which might symbolise the three cities in the three greatly separated countries. Hemer has taken a normally square QR code and stretched it so it still works but also correlates with the physical dimensions of the referent.

The arrow on the Google map states the title so you can be visually curious first, stimulated to reach for your iPhone and be informed without having to read the wall label. The aerial satellite view of the building happens to reflect the important fact that Pollock’s work was made on the floor with the artist immersed in the painting, approaching it from all sides – a composition with no clearly defined compositional borders that like a Google map, extends outwards forever.

There are three sites - NYC, Canberra and Hamilton - and three years, 1952, 1973 and 2011, archeologically compressed like a club sandwich. And indeed, the more you research the original Blue Poles the more you discover the complexity of its construction, that Pollock’s close friends artists Tony Smith and Barnett Newman played a role in its underpainting during a drinking session at Pollock’s studio. Other hands and other minds helped kickstart it. However Andre Hemer’s Blue Poles is only partially about his black and white rectangular conduit and not about mental pictures of Pollock’s dripped creation. It is more about nations’ cultural capital and status in the global community and his own individual artist’s career aspirations – not so much its physical properties. Julian Dashper also made works referring to Blue Poles. And other artists have used QR Codes.

What is special is that there is a synthesis between the work’s shape and the Pollock’s history of being shifted across the world – the co- ordinates of location – and how that movement is perceived. Its meaning lies outside of Pollock as maker of revered icons. On a broader level we are talking about Kiwis looking at Australians looking at Americans, or it could be just Kiwis looking at Americans…..and the nature of our envy over their participation within post-World War 2 international art history. What can a professional New Zealand artist expect in terms of success and career recognition? What is realistically attainable? Are these ruminations gazing at such art pilgrimage destinations valuable? The work plays with presence and absence - for you see only the height and breadth of Pollock’s painting, that’s all, not a photograph of it. You don’t need to see reproductions of the original, for Hemer’s work is about myth building and art historical reputation, and what inspires (but also worries) artists living on the periphery.

The Bold Horizon National Contemporary Art Award is an opportunity for New Zealand artists to appear in an overview of national artistic practice and feature in a major exhibition within the Waikato Museum. The winner receives $15,000.

Among our national art community this Art Award, established by the Waikato Society of Arts in 2000, is regarded as one of New Zealand’s premiere contemporary art events. It has put Waikato on the map for its thought provoking entries that promote debate about what is fresh and innovative in art.