The fashion design background of Waikato Museum Exhibitions Technician, Grant Davy, has been put to excellent use in creating the ‘retro lounge’ within the exhibition Our Moon: Then, Now & Beyond.

Read on for an insight into the research and inspiration behind this custom installation. 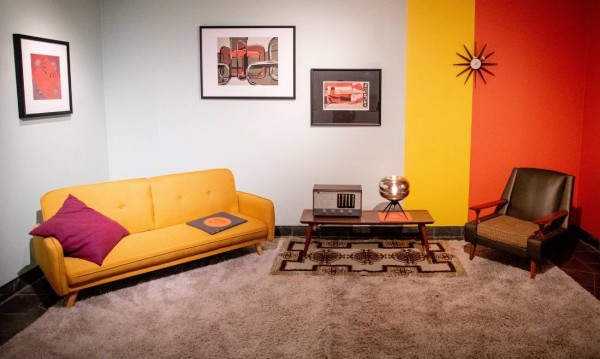 For many of us, the aesthetic of the future seems clearly defined. Stark, clean, and technological. But for mid-century idealists the future was a colourful and luxurious place, light years away from the harsh realities already lived in the early twentieth century.

A boom in scientific development, led by the space race and frenzy of post-war modernity, changed the outlook for everyday life. Consumer products such as televisions exploded from print ads into living rooms in an array of colours and materials. Innovative materials like Teflon, Velcro and Lycra eased their way into everyday life. Furniture design was moving away from heavy wooden structures to light cellular forms that could almost defy gravity.

For our retro lounge, a feature of Our Moon: Then, Now & Beyond, we wanted to touch on this hopeful vision of the future. Inspired by concept art from the 1960’s on how humans may move and live beyond earth, colours were chosen from these imagined habitats. Bright yellows and oranges dominated much of the colour scape, as well as jewel-toned blues and greens.

(For those who are curious, the specific colours used on the retro lounge walls are all Resene paints: Clockwork Orange, Wild Thing, and Kandinsky.) 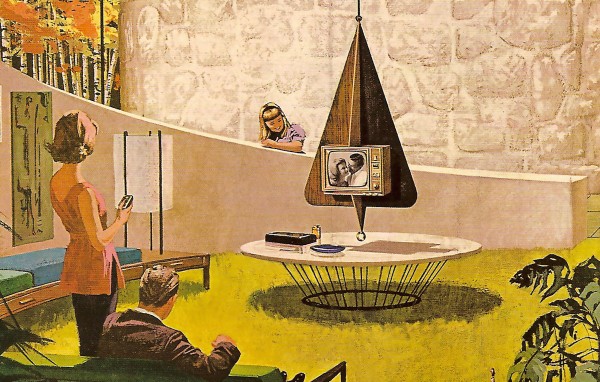 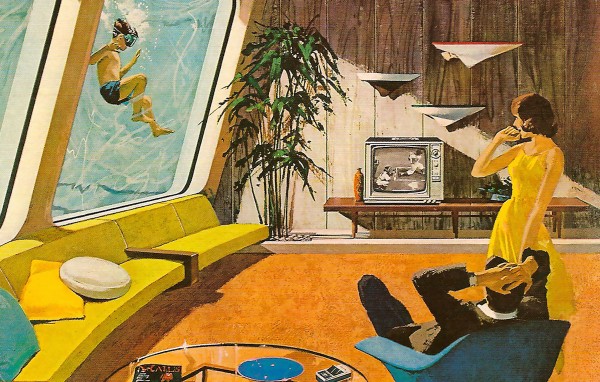 This vibrant phase of artwork coincided with the development of plastic laminates and faux-finishes on furniture and joinery. An unprecedented range of colour was available in the home, and it was being used on every work surface, cupboard and sink.

For our room, we chose replicas of design items like the George Nelson ‘sunburst’ clock, which appears in almost every image of a mid-century home (whether real or imagined). The iconic Charles Eames features in the form of his ‘hang it all’ coat rack, which could almost be mistaken for a model from a high-school science class.

Conventions in dress began to shift monumentally at this time too. With essential forms in the home, the excess of the post-war wardrobe slimmed down and began to match the sleek aesthetic of this new, manufactured future.

The ornate 1950s aesthetic of Dior’s New Look was usurped by Cardin, Courreges and Paco Rabanne’s assault on traditional fabric manufacturing, with mini-dresses developed in paper, plastic, aluminium, and elastic fibres. Acetates, acrylics, and other synthetic materials accelerated from being just glittering accents on evening gowns. They became capsule windows on coats, alien substances fused into mini-dresses, and hard coatings on moulded hats and jewellery. Menswear moved from heavy woollens to brand new polyester fibres, in colours that had been unachievable in previous decades.

The movers and shakers of the European fashion world may seem far removed from the daily life of Hamilton suburbanites, but traces can be found in the simplest of personal items. Costume jewellery was shifting away from the imitation of fine jewels, to expressing artistic exploration of form and material. Diamantes were set into shapes that resemble constellations, steel and brass could be moulded into satellite brooches. Plastic was cut and splayed into forms resembling extra-terrestrial life or an unknown microbe, or more basely, an atomic structure. 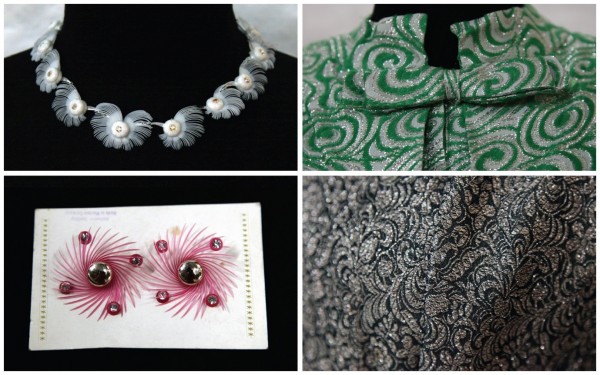 Above are examples of plastic jewellery from the 1960s (private collection), and details of two extant 1960’s dresses from the collection of Te Whare Taonga O Waikato. They are fantastic examples of the way atomic forms presented in fashion of the era- nebulous, and explicitly artificial.

While it is difficult to boil down a decade or design movement to a few simple elements, it is safe to say that the march toward space exploration made a huge imprint on our lives. The Moon felt like our backyard for just a moment, and the entire Milky Way seemed a little closer.

While designing and immersing ourselves in Our Moon’s history, it was easy to get swept away in the excitement from the time of the Moon landing. How would we dress on the Moon? Which materials could survive, and be producible without the textile mills of Earth? What would we wear to feel comfortable or chic on our galactic travels? 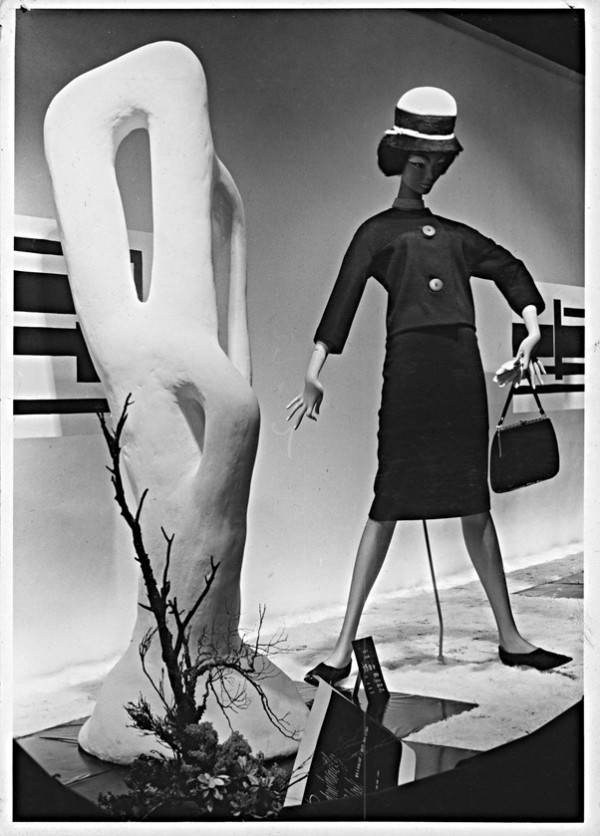 The above image is an autumn window display at Hamilton’s H&J Courts in 1964. The scene could be a sci-fi land scape, the suit is blatantly stream-lined, perhaps a little utilitarian. The fantastically convex hat shape is a great example of essential, cellular forms migrating into fashion. (Accession number HCL_14511)