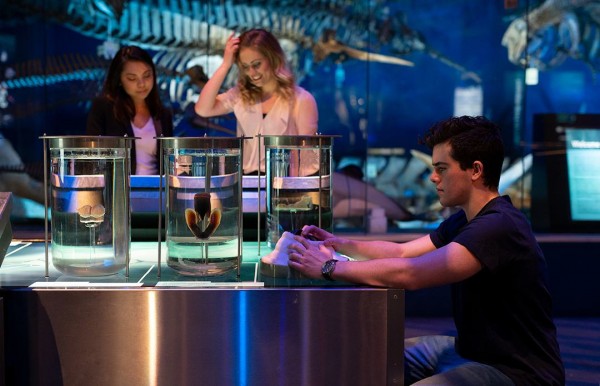 The Colossal Squid is so rarely seen that only eight adult colossal squid have ever been scientifically reported. Now Waikato Museum in co-operation with Te Papa, is set to reveal some of the fascinating science and wonderful secrets of one of New Zealand’s most significant natural history specimens.

Te Papa's Head of Natural History, Phil Edgar said, “in learning about this weird and mysterious creature we hope visitors will have a greater appreciation for life in the deep sea, much of which remains undiscovered.”

The Colossal Squid is one of the most iconic specimens at Te Papa, and while touring the complete specimen is impossible, some of the important parts of the squid has found its way to Waikato Museum.

Te Papa’s Curator of Invertebrates Dr Rodrigo Salvador explains how important the Colossal Squid has been for the science community, and how popular it has been among the public.

“Te Papa’s Colossal Squid has been a major source of information for scientists and the museum’s most popular exhibit since its debut. They live in the deep Antarctic waters and despite being one of the largest invertebrate species in existence, they are very rarely captured”.

Colossal Squid: Freaky Features! Te Ngū Tipua: Ngā Wāhanga Weriweri! centres around an interactive table displaying many different objects including the lens from an eye of the Colossal Squid, part of a tentacle, and a complete tiny squid; the miniature of its colossal relative. Touchable rotating models of a squid’s tentacle hook and the Colossal Squid's beak are also on display.

The exhibition also displays two documentaries which show life in the depths of the Southern Ocean, and how the most complete Colossal Squid ever found ended up at Te Papa.

The public are able to continue the experience and learn beyond the exhibition with a new Te Papa press book for children, Whiti: Colossal Squid of the Deep, and online Te Papa resources including a free downloadable Colossal Squid Activity Book.

“We are thrilled to be the very first hosts of this freaky and fascinating touring exhibition,” says Liz Cotton, Director Museum and Arts at Waikato Museum.

“It’s a truly unique opportunity to get hands-on here at Waikato Museum and learn about this mysterious giant creature.”