For Us They Fell: Waikato WW1 Centenary Exhibition 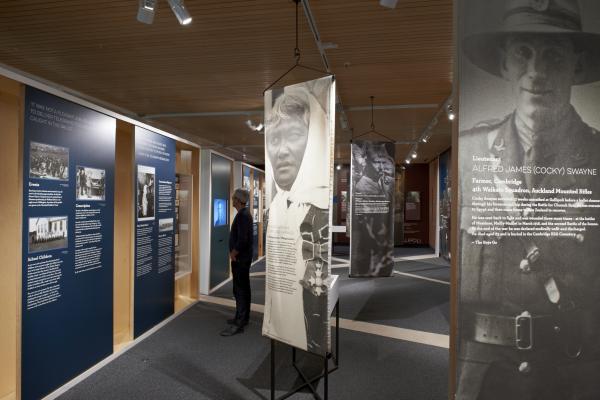 For us They Fell is an exhibition about the human stories of the people of the Waikato and World War 1.

The exhibition follows a broad chronology, taking the visitor from Waikato as it was just before the war, through the major campaigns and events, and finally to the aftermath and on to the present day. At each stage the story is told mainly through the experiences of the ordinary people of the Waikato who lived through it – or died because of it; where they fought, what they said and did, where they fell and what happened at home.

For Us They Fell is a living exhibition which will continue to evolve during the World War 1 centenary years.  An interactive website, forustheyfell.org.nz  allows people to add information and imagery of loved ones, family members or people in local communities who served in the war.

This content forms part of the exhibition, as well as being accessible online.

Free guided tours of the exhibition are available daily, including on public holidays, at 11am. We will be running guided tours at 11.00am, 12.00pm, 1.00pm and 2.00pm on ANZAC Day. Find out more here.

Education programmes available for this exhibition.

Use touch screens to scroll through images of Waikato soldiers and nurses contributed by the community via our interactive database www.forustheyfell.org.nz.

The world the Waikato soldiers left behind in 1914.

The sudden unravelling of Europe’s fragile peace leads to the outbreak of global war in 1914.

Men leave their homes in the Waikato and all over New Zealand in large numbers to fight on the other side of the world.

Kiwi troops make their way overseas – to Samoa, to Egypt and the Middle East and later to the battlefields of Europe.

New Zealanders suffer horrific losses in our first major battles of the war, but are bonded in shared hardship during the disastrous nine month campaign to take the Gallipoli Penninsula.

Dismissed by some at home as ‘tourists in uniform’, New Zealand troops stationed in the Middle East fight a long, gruelling war in the Sinai and Palestine.

For all its horrors, the war also gives our troops a chance to ‘see the world’. Learn how our diggers spent their time off in the big cities of Europe.

Our troops make a name for themselves in the major theatre of the war. Some live to tell the tale; others will never return. Their diaries and letters offer a window onto their experiences.

A look at the contribution of these unsung heroes of the First World War, so many of whom came from the Waikato (and so few of whom returned).

The lives of many soldiers are irreparably damaged by horrific battlefield injuries. Hear the stories of the war-wounded and the nurses who cared for them.

Those left behind struggle to make ends meet and worry about their loved ones, yet find ways to survive.

Soldiers return to the Waikato. For some the transition back to civilian life is smooth; for others it is almost impossible.

Waikato and the War Today

A place to reflect on how we in the 21st century remember the First World War, and discover connections between past and present.

For Us They Fell is funded by a Lottery World War One Commemorations, Environment and Heritage grant.