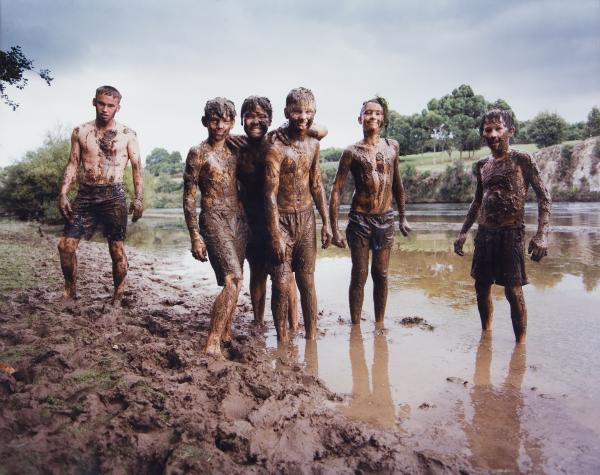 The artist of the iconic Gallipoli watercolour, The Man with the Donkey, is one of the subjects of a new Waikato Museum exhibition, Kirikiriroa Non-Fictions: True visual histories from the Hamilton CBD, which opens on Saturday (14 December).

Sapper Horace Moore-Jones was a soldier, war artist and heroic Hamiltonian who died saving others in the Hamilton Hotel fire of 1922, but who was largely under-recognised in his hometown until a central Hamilton street was named after him in 2012 and a bronze statue unveiled in 2015.

Other images and stories from the Hamilton Kirikiriroa cityscape drawn into the exhibition include images of the bronze Riff Raff statue that marks the spot where The Rocky Horror Show creator Richard O’Brien found his inspiration while working at a Hamilton cinema when he was a teenager.

An image by New Zealand photographer David Cook of mud-covered boys on the Waikato riverbank tells a story of the central role the river has played and continues to play in the lives of Hamiltonians.

Waikato Museum Director Cherie Meecham says: “Waikato Museum looks after the city’s public art, and is also guardian of photographs and other art works in our permanent collections that help narrate actual events and sights in Kirikiriroa CBD and suburbia over the years.

“This exhibition pays tribute to artists and photographers who are often among the first to record history by their depictions of their immediate environment.”

The exhibition also includes photographs by New Zealand photographers Robin Morrison and Natalie Robertson (Ngaati Porou) as well as a number of other artworks.